8 body language tips to improve your negotiation skills
Strong negotiation skills are hugely advantageous throughout one’s life, from presentations to negotiations. These skills largely rest on your ability to back up your words with physical actions that exude openness, honesty, and confidence. This fosters trust and increases the other party’s desire to react cooperatively and reach agreement. Studies have shown that people are 80% more likely to remember information that was communicated to them both orally and visually.

1. PERFECT THE HANDSHAKE
You’ve arrived on time - well done! What’s next? The handshake. Attesting to the trust-promoting powers of an old-fashioned handshake, legendary Hollywood talent agent and dealmaker Irving Paul Lazar once said, "I have no contract with my clients. Just a handshake is enough." The most and, really only important thing about your handshake is that you have one at all. Researchers at the University of Chicago recently published a group of studies concluding that a handshake (any handshake, even the floppy one) makes people feel comfortable, promotes honesty, and increases the cooperative behaviors that lead to deal making. This doesn’t cost you anything.

2. MIRRORING BODY LANGUAGE
As much of your ability to set a positive tone for a successful negotiation rests on keeping control of your body language, so does your intuition in responding to the body language and non-verbal cues of your potential opponents before choosing to engage with them. Use some time to mirror the body language before you get started.

3. MAINTAIN FRIENDLY EYE CONTACT
Shakespeare once wrote that "the eyes are the windows of the soul." Indeed, eye contact is one of the single most powerful communication tools between two people, as it conveys openness, sincerity, and trust. Avoiding eye contact in a negotiation keeps a good rapport from developing. It gives the other person the feeling that you’re being evasive or dishonest, both of which make negotiating very difficult. On the other hand, eye contact is so powerful that too much of it can be threatening and seen as aggressive or intimidating. You should keep relatively consistent eye contact but remember that it’s natural to look away when thinking or processing.

4. BE AWARE OF YOUR FACIAL EXPRESSIONS
Anyone who has ever been in a relationship has probably experienced the feeling of sheer frustration when their partner stops short in the middle of a conversation and says "What does that look mean?!" Like it or not, in a negotiation setting your facial expressions will be under that same microscope, so try to make sure that they enhance the positive verbal cues that you’re giving. Take care not to frown or wrinkle your forehead worryingly and take the opportunity to smile and nod in agreement whenever possible. Keep your chin up, evoking positivity, and your eyes level. Remember, the other person will be looking to see that your physical gestures mirror your words—keep them both open and positive to be authentic.

5. MAINTAIN PERSONAL SPACE: PROXEMICS
The science of personal space, otherwise referred to as "proxemics," focuses on the distance between people as they interact. Ever felt incredibly uncomfortable or pressured when a co-worker stood a little too close while speaking with you? To the point that you were shuffling your feet and silently willing them further away, no longer paying attention to the conversation?
As you can imagine, such a situation completely disrupts the negotiation process. It’s important for each party to feel that their personal space is being respected and that they’re not being physically intimidated. A safe rule is to sit or stand at least 1 m away to gauge their comfort level.

6. KEEP YOUR LIMBS CALM AND OPEN
Just like you want the words that you’re saying to exude strength, confidence, and calm during a negotiation, so should your body. If you’re constantly tapping your fingers or feet or crossing and uncrossing your legs, it will signal that you are in a stressed, rather than thoughtful, state. Keep your legs calm and your hand movements limited to expression.
In the same vein, any level of crossed limbs or hands might be interpreted as being negative and closed off, which won’t help you to elicit trust in any negotiation. No one wants to talk to someone who seems to have already made up their mind. So uncross your arms and legs and keep some distance between your hands to appear open minded and ready to listen to others' points of view.

7. SLOW DOWN AND KEEP QUIET
Everyone, no matter the situation, wants to feel that their input has been heard, respected, and considered before a counter move is made. However, the stress of the negotiation, combined with your excitement and desire to get your point across, can make you jumpy and overenthusiastic, rushing your words or even talking over the other person. Listen closely to the other person, pause for a while to show you are thinking about what they said, and keep your response slow and calm. This conveys respect but confidence in your position.
Don’t be afraid to be silent for a short while, sparking the other person’s insecurities. The effects may surprise you. Never forget the power of silence. 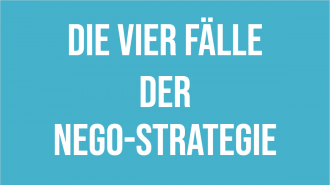 Hello Azerbaijan, hello Baku, dear friends of professional negotiation practice all over the world, in cooperation with Dr. Magnus Müller, Head of Vocational Education & Training at the German-Azerbaijani Chamber of Commerce we offer an Online Negotiation Training on July 8th-9th.